OK, I know I shouldn’t say it but what a wonderful start, weather wise, to the year. This has meant that the boat yard has been a scene of great activity.

The Fitting out dinner was very enjoyable, a good meal followed by a funny comedian, excellent.

The winner of the 2018 BSC Photo completion is Mike Ascott with the splendid image below, well done Mike. The entries are on display boards in the clubhouse. 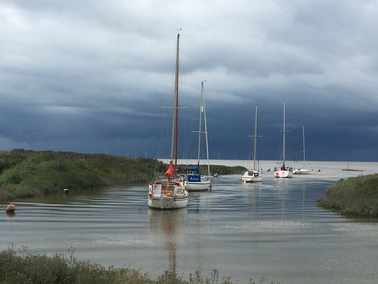 Observant types may have noticed a new boat in the yard, Liberty. Charles has provided me with the story of how this boat came to be an addition to BSC, written by the former owner Sven – “Some bloke who gave us a boat”… I love it.

Once upon a time there was a little boat called Liberty…

She was found looking a little unloved on the hard in Swansea. The fibreglass around her stanchions was cracked, the windows similarly so, the cushions were mouldy, the keels were rusty and she didn’t have any power or instruments.

She was bought by a man with good intentions but little time who intended sprucing her up to reveal the nifty little day sailor that could navigate the tidal waters of our fair island, but alas she never saw the sea as the renovations proved somewhat more challenging than expected.

Whilst she had a solid hull in great condition, her setup was a little basic. For a while she was on the hard on Hayling Island where she had her keels refurbed and rust treated, received a coat of two part epoxy paint to the hull, got some synthetic teak decks and benefited from some new cushions. From there she moved to a barn in Guildford where her stanchions, winches and deck hardware were fixed and reinforced with stainless steel plates.

This time Liberty found her way to a caravan storage park in Croxteth where she was sadly neglected for many years hoping that her owner would return, polish her up and put out to sea. After it became evident that this was unlikely to happen, she moved to Blundellsands Sailing club where she could get the attention she so desperately needed, and they embraced her like a long lost member of the family.

Cedric has had good repairs to sails done by Tim Parker in Southport. Google Tim Parker Boats or see his card on club noticeboard. He also does boat repairs.

Glasplies have apparently gone from Southport. Some supplies are available from Formby Timber on the industrial estate. If any member knows of similar, please let me know.

Hello all, Happy New Year.
The first social event of 2019 is fast approaching. The Annual Fitting out Dinner is being held on Saturday the 2nd February at the Clubhouse (19:30 for 20:00). The entertainment on the night is being provided by comedian Denny Waters. Tickets are priced at £25, please put your name on the list in the Clubhouse.